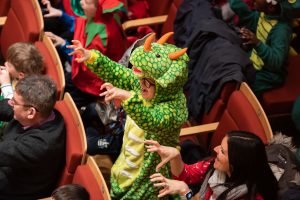 On 6th and 7th March, something unusual was afoot in the Stoller Hall!  The hall went dark and an egg appeared on the big screen.  The egg hatched and a dinosaur appeared.  This was Dollop the Dinosaur who had lost his mum but luckily there were plenty of people in the hall to help him look for her.  They met the Dinosaur Orchestra who introduced them to different orchestral instruments like the violin, bassoon and trombone.  Along the way, they met a variety of dinosaurs, including a triceratops, stegosaurus, pterodactyl, Argentinosaurus, T-rex and a velociraptor.  Every time a new dinosaur appeared the audience were encouraged to give a ‘Dinosaur hello’ by flapping their wings, showing their claws, stomping their feet and ROAR-ing like a dinosaur.

The concert used music from a range of periods, including Romantic, 20th Century and contemporary.  The Dinosaur Orchestra members were both professional musicians and students from Chetham’s School of Music.  The ‘Flight of the Bumblebee’ by Rimsky-Korsakov showcased the violin, while the flute soared over the orchestra in ‘Morning’ from Greig’s Peer Gynt Suite and in ‘Fossils’ from Saint-Saens’ Carnival of the Animals the audience heard the xylophone.  Lenny Sayers’ ‘Stomp Like A Dinosaur’ got the entire audience on their feet and singing along.  There were actions to join in with and the lyrics were projected on the big screen. One lucky audience member even found a dinosaur under their seat, but unfortunately, it still wasn’t Dollop’s mum.

Dollop went on a quest to find his mum, running around the auditorium and up into the balcony before disappearing.  When he re-emerged, a voice boomed on the stage saying there were strange lights in the sky and Dollop had to go straight away.  Re-united with his mum Dollop ran off and the Dinosaur Orchestra played music from ‘Jurassic Park’ as the concert ended.  It was a great hour of music, movement and learning.