Christmas is in the air 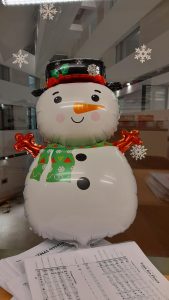 Despite the pandemic the year is flying by and the festive season is here again!  We have to admit our snowflake decorations haven’t made it down from the windows all year but now it means the office is looking cheerful.  There was a hive of activity last week in the Stoller Hall as we recorded items for our filmed concert “A Chetham’s Christmas”.  Over 200 balloons were blown up to add festive cheer to the stage and we got rather good at measuring 2m to ensure everyone was safe and socially distanced when singing.  We were delighted to welcome conductor Ellie Slorach to lead the orchestra and choir.  The week before we had a number of virtual Christmas samba sessions with schools around Greater Manchester and we’re hoping to incorporate their films into our final production.  Our talented musicians at Chetham’s performed White Christmas, Waltz of the Flowers from Tchaikovsky’s Nutcracker and three traditional carols.  The film will be released before the end of term and we can’t wait to share it with you!  Keep an eye on @ChetsOutreach and our website to be one of the first to view it.